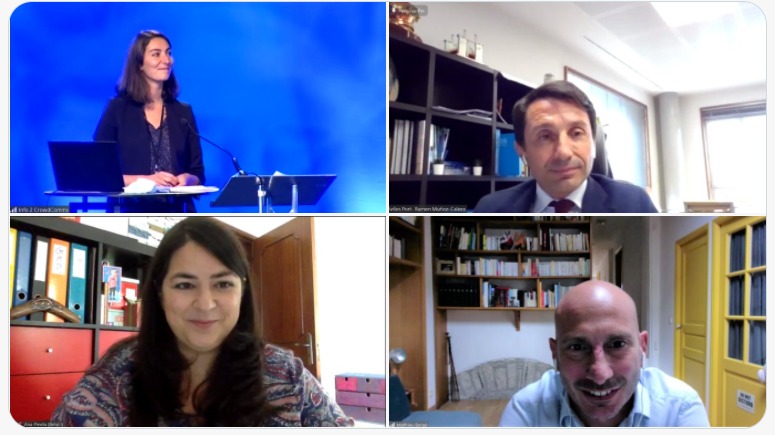 During the 8th Atlantic Stakeholder Platform Conference held both online and in Dublin on 21 October 2021, the CPMR Atlantic Arc Commission and the IMDO, partners of AspBAN project, co-organised a workshop on the “Perspectives on Green Ports of the Future”. The workshop gathered around 80 participants who could interact with a panel of representatives from the port, companies, and public authorities engaged in the development of Green ports. Ana Pinela, project manager at Beta-I and leader of AspBAN, showcased the added value of the AspBAN project as a solution provider for greening the ports among experts.

The workshop, introduced by Liam Lacey, pillar coordinator of the Atlantic Strategy, was the occasion to showcase AspBAN Project as a solution provider to build a community of stakeholders around ports to develop green ports and implement the Atlantic Strategy Pillar I on Ports as Hub of the Blue Economy. AspBAN project particularly shined during the event as it won the Atlantic Award under the category “Atlantic Ports” during the 5th Atlantic Project Awards ceremony.

AspBAN project was not the only project featured. Dr. Christina Kelly, from the Queen’s University of Belfast, introduced the workshop presenting the MOSES Project, to inspire the audience on blue growth pathway for ports development in the Atlantic area, through the case study of the Belfast Harbour.

In response, Patrick Keating, representative of the Shannon Foynes Port Company, Ireland, and Ramón Muñoz-Calero, Director of the Port of Avilés, Spain, commented on the role of ports to reduce their carbon emissions and to support the development of economic activities that will play an important role in the green transition, such as marine renewable energies or storage of alternative fuels.  Jorge Miguel Lara López, representative of the technology platform Waterborne, showcased the importance to define a reliable business model for the green transition of each port. Mary Dunning, representative of the transport ministry of Ireland, presented the policy framework in Ireland which supports the ports in their green transition. Mathieu Bergé, Regional Councillor of Nouvelle Aquitaine, France, underlined the key role played by regional ports in the ecological transition, not only to reduce congestion on main transport roads but also in the development of circular economy models within the ports, such as for the production of steel in the port of Bayonne.

In conclusion, Green ports of the future are not only ports reducing carbon emissions but integrating all the aspects of the green transition to meet the environmental objectives. This transition does not go without challenges (good governance models, land-use decision, adaptation of infrastructure and investment). The workshop offered a condensed picture of green ports in the Atlantic, boosting the dialogues on future opportunities for AspBAN to expand!