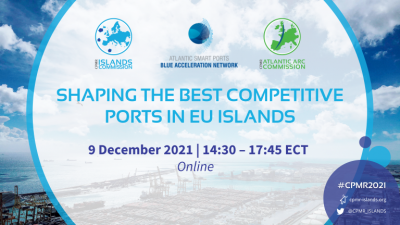 All hands on deck! Shaping the best competitive ports in EU Islands January 11, 2022

On 9 December 2021, the CPMR Atlantic Arc and Islands Commissions organised a joint workshop to discuss together the challenges and future opportunities of the diversification and modernisation of islands ports. This meeting was organised in the framework of the CPMR Blue Acceleration Platform set up via the AspBAN project, enabling discussions on the replicability of the project in other sea-basins and encouraging an innovative and sustainable transition of ports as hubs of the Blue Economy.

Xavier Ramis, Director General of Maritime and Air Transports, the Balearic Islands Government, opened the day by reminding the necessity to understand the specificities of islands. He stressed the need to consider the additional costs of the insularity that particularly affect transport sectors. In this respect, he welcomed the potential of the INI Report on Islands and Cohesion Policy and stated “The INI Report could be the first step towards a European Strategy for Islands (…) putting an end to the additional costs related to maritime transports in EU Islands.”, which would thus allow more suitable conditions for a sustainable and modernised development of the ports.

Kicking off the first session on diversification of ports services in EU Islands, AAC Executive Secretary Elise Wattrelot presented AspBAN, an EMFF-funded project acting across the Atlantic to foster acceleration services for blue SMEs, creating opportunities for ports to go beyond their current activities and become active ecosystems for the development of blue and sustainable businesses. Among the activities the project, an open call for start-ups was launched to boost their innovation and sustainable services in the Atlantic through tailor-made support and bi-monthly speeches in front of investors. The project received 121 pertinent applications, and the final pool of 80 start-ups that will beneficiate from the project’s services will be announced soon…Stay tuned!

Building on the highlights from the AspBAN project, EU Islands members presented key insights on their regional perspectives and readiness of ports to boost Blue Economy start-ups. Eric Legrigeois, Chief Executive of the Port of La Réunion, especially underlined the important potential of blue/green hydrogen to contribute to the modernisation of ports and the high 2024 ambitions of la Réunion for renewable energy for the port, which would notably be facilitated through the Recovery Plan. Xavier Ramis and Francesc Antich Oliver, President of the Port Authority of the Balearic Islands, addressed the possibilities offered by public/private partnerships and investment in innovation and digitalisation in the light of the region’s high sensitiveness to biodiversity protection, circular economy, marine renewable energy, and waste management. Recalling the synergies of the EU Blue Economy Strategy and European Green Deal, Felix Leinemann, Head of Unit for Blue Economy Sectors, Aquaculture and Maritime Spatial Planning at DG MARE, welcomed the latest developments of the AspBAN project and recalled the crucial role of ports as hubs of the blue economy and thus facilitators of a sustainable transitions to boost activities on decabornisation, biodiversity, responsible food systems and circularity. In this perspective, island regions can become laboratories of experience to launch innovative and sustainable projects, in line with the priorities set by the European Green Deal and the Blue growth strategy.

The second session of the day, which focused on the modernisation of ports infrastructures, offered a comprehensive overview of the current state and the way forward. Bart Biebuyck, Executive Director of Fuel Cells and Hydrogen Joint Undertaking (FCJ HU) gave an insightful presentation of the Clean Hydrogen Partnership and the projects supported and calls calendar. He presented implemented examples of hydrogen valleys across European islands, giving food for thought for the future of EU Islands. José Rino, Projects Directorate for Air & Maritime Division at European Investment Bank followed with a presentation of the EIB support to ports to finance sustainable transports projects, and ensure the connectivity of peripheral region and islands, giving helpful advice for the applications of proposals. This second session concluded with the EU Islands sharing their on-field experiences. Sandra Casanova, President of the Committee for Territorial Logistics Strategies, Research and Innovation Policy for Martinique, particularly pointed out the importance for sustainable transition to benefit the local population economic development. Paula Cabaço, President of the Administration of Ports of the Autonomous Region of Madeira, presented an overview of the region’s ports and their vision of the future, and Fritz Farrugia, Deputy Harbour Master & Deputy Chief Officer of the Ports & Yachting Directorate, Transport Malta, shared the specificities of the archipelago and the ambitions of the island to develop a green economy.

Future crossed Geographical Commissions meetings will be organised in 2022 to build on the developments of AspBAN.